There are a surprisingly large number of science fiction movies that feature robots. Here are my 10 favorite sci-fi robots. To keep the candidate list manageable, I arbitrarily disqualified animated robots (so no “Iron Giant”), cyborgs (so no “Blade Runner” replicants), and cute robots (so no “Short Circuit”). These are my favorite robots, not necessarily my favorite films.

1. Robby the Robot, in “Forbidden Planet” (1956) – The best sci-fi robot ever in a great movie. Robby appeared in quite a few TV shows in the 1960s which somewhat diminished his reputation in my mind.

2. Maria, in “Metropolis” (1927) – If you haven’t seen this film and notice the 1927 year, you might underestimate how good this silent film is. Maria was the first robot to appear in a movie. 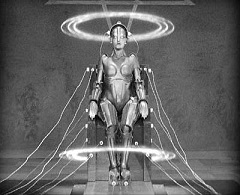 3. Gog, in the movie “Gog” (1954) – I loved this movie when I was young and it still holds up pretty well. Gog is a six-armed research robot (with a flame thrower!) that causes problems at a secret government research lab in the desert.

4. T-800 robots, in “The Terminator” (1984) – Here I mean the skeleton-like robots who are battling humans in the year 2029, not the human-looking cyborgs. Excellent special effects by the Fantasy II company (whose owner’s father did effects for the great “The Time Machine” of 1960).

7. Sentinels, in “The Matrix” (1999) – These are the vaguely squid-like flying robots that patrol the sewers looking for humans. Pretty scary these things.

8. Maximillian, in “The Black Hole” (1979) – I like this movie a bit more now than I did when I first saw it. Maximillian is red and has a cool red eye slit, but I wasn’t impressed by the fact he was a flying robot (using wires is a lazy way to get him to move around).

9. Gort, in “The Day the Earth Stood Still” (1951) – One of the early icons. Gort’s eye slit influenced many robot designs that followed. Klaatu barada nikto. 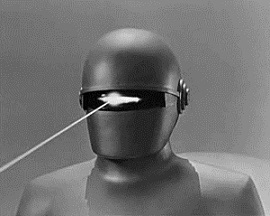 10. Alien robot invaders from Venus, in “Target Earth” (1954) – I watched this many times on TV when I was young. Earth is invaded by robots sent from Venus. Low budget film and low budget robots that are so bad they’re cool.

The Cylons, with red eye slits, from the 1978 TV series “Battlestar Galactica” were probably the best part of the not-so-good show. The Robot in the “Lost in Space” television series (1965-1968) is one of the most annoying robots in cinema. Sonny from the 2004 movie “I, Robot” was nicely done but not mechanical enough for my tastes. ED-209, the heavily armed killing machine from Robocop (1987) was too mechanical for my tastes. Kronos from the 1954 movie of the same name is very cool, but not really a robot in the usual sense. Same for Talos from “Jason and the Argonauts” (1963).

Chani the robot from “Devil Girl from Mars” (1954) (below). The movie is bad but oddly appealing.

The aptly named robot Box from “Logan’s Run” (1976). This movie is fairly well-regarded but I’m not a fan of the movie or the robot.