I’ve always had a special fondness for comic books of the 1960s, the so-called Silver Age. Everyone knows Superman and Spiderman, and so on. But there were some interesting super hero comic book titles that aren’t as well known. Here are my 10 favorite lesser-known titles that you might not have heard of.

1. Adam Strange – Adam Strange was an archeologist who was accidentally teleported to the planet Rann. He had no built-in super powers and relied on his wits and Rannian technology to defeat enemies. The stories tended to be a bit more scientific than other titles of the 60s. 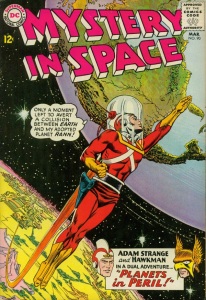 2. Ant-Man – Ant-Man is now fairly well-known because of the 2015 movie. The comic character first appeared in 1962. Scientist Hank Pym invents a way to shrink his size. The character became Giant-Man in 1963 but I always preferred Ant-Man. 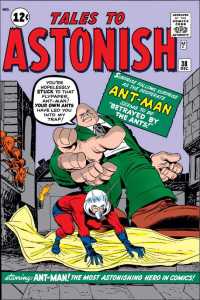 3. The Fly – The Fly was an Archie Comics publishing character who first appeared in 1958. Tommy Troy turned into The Fly using a magic ring and could walk on walls, had great vision, and was very agile. Of all the possible insects to emulate, I always wondered why a fly? 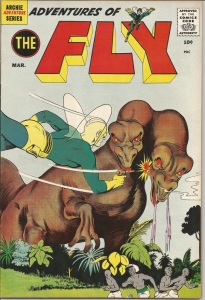 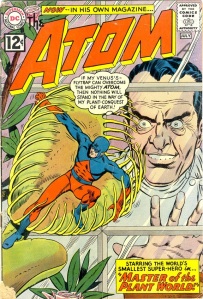 6. Turok – Turok and his pal Andar are ordinary Native American Indians who get trapped in a valley with dinosaurs. Published first by Dell and then by the spin-off Gold Key Comics, this title had great artwork and fantastic cover art.

7. Hawkman – The Silver Age Hawkman first appeared in 1964. He was Katar Hol, an alien policeman from the planet Thanagar. Hawkman was never that popular and appeared mostly as a secondary character in other titles.

8. The Martian Manhunter – He was J’onn J’onzz from the planet Mars who is accidentally teleported to Earth. He had super powers that more or less varied as plot lines required. 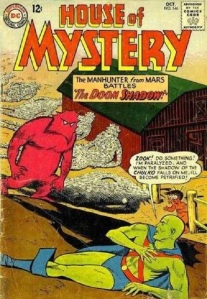 9. Solar – He was Doctor Solar, Man of the Atom. A Gold Key publication with very nice artwork. Physicist Dr. Phillip Solar survives a nuclear accident that gives his body weird radiation powers. Radiation, even back in the 60s, was a scary topic and reading Solar always makes me slightly uneasy, but I enjoy the title.

10. The Jaguar – An Archie Comics super hero. He is zoologist Ralph Hardy. He gains the powers of a jaguar when he wears a mystical nucleon energy belt. There were only 15 issues of “The Adventures of the Jaguar” although he appeared as a guest in other titles too. The Jaguar feels very old-fashioned and simplistic, but that is its charm to me. 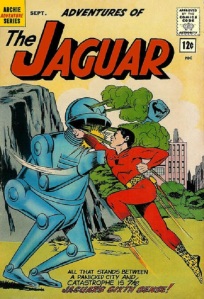