Posted on December 23, 2017 by jamesdmccaffrey

In the image below, on the left, distribution P is some observed frequencies for X = 0 to X = 6. Distribution Q is the mathematical binomial distribution with p = 0.60. The graph shows the two distributions are not very similar. The KL divergence, KL(P, Q) “to P from Q” is -1 * sum[ P * ln(Q/P)] and the calculations shows that equals 0.4041. 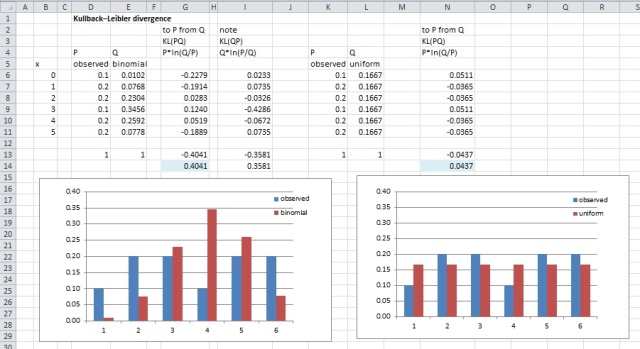 Note that KL divergence is not a distance metric because KL(P,Q) does not equal KL(Q,P).

So, what’s the point? KL divergence can be used in several ways. In particular, an interesting unsupervised machine learning technique called Variational Autoencoders (which I’ll explain in a future post).