Posted on August 11, 2021 by jamesdmccaffrey

There are several different versions of Wasserstein distance. There are versions that work with discete data and versions for mathematically continuous data. There are versions for 1-D data (each point is a single value) and versions for n-dimensional data (each point has n values). And there are “p versions” which are denoted by 1-Wasserstein (aka W1 for p = 1), 2-Wasserstein (aka W2 for p = 2), and so on. Unless otherwise stated the default is p = 1 (1-Wasserstein, W1) which means you look at the absolute value of differences. If p = 2 you compute the square root of squared differences. If p = 3 you compute the cube root of distances cubed, and so on.

When I write “Wasserstein distance from scratch”, this isn’t really correct. I really mean Wasserstein distance for p = 1, for 1D discrete data, where the data is a probability distribution (the values sum to 1.0). The version I implement is more accurately described as 1D discrete probability distribution information transfer distance — but that’s a bit too wordy.

Some time ago I explored exactly how the Wasserstein distance is calculated by doing an example by hand. I verified my understanding by running my example problem through the scipy library wasserstein_distance() function. 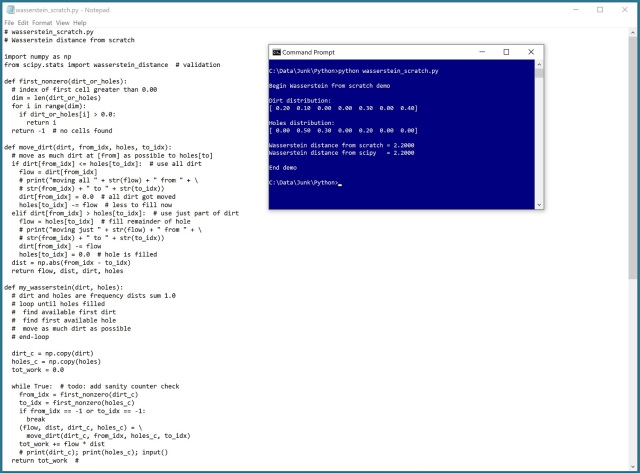 After a bit of work, I succeeded, but with a small asterisk — my implementation, like the scipy version, only works for 1-dimensional discrete distributions. This means each data point is single probability value, like 0.3, as opposed to a multi-valued item like (0.3, 0.2, 0.6).

My implementation from scratch mimics this algorithmic process. The implementation is moderately tricky and is best understood by examining my code below.

I validated my Wasserstein implementation from scratch by generating 100,000 random pairs of distributions and then computing the Wasserstein distance using both my implementation and the scipy library function. All computation results were the same.

Mermaids are a very common art subject. I speculate that this may be so because the morphological distance between a mermaid and a woman is just enough to make mermaids interesting but not creepy. I’m not a big fan of mermaid art but these three are pretty nice. The one on the right was painted by Erte, (Romain de Tirtoff, 1892-1990) the famous artist and designer who developed the Art Deco style.

This entry was posted in Machine Learning. Bookmark the permalink.